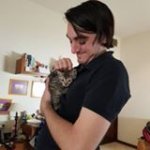 By Mauricio Porte,
August 18, 2014 in Evolution, Morphology and Exobiology