What engines and fuels would interstellar species use for space travel? 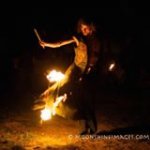