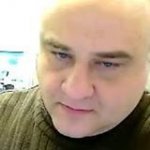 How much would time pass between watching the sun set from ground level and then watching it set again from the top of a sky scraper?